If I Were A Boy

Before attending university I was completely unaware of the diversity problem in STEM. In high school all of my classes were relatively 50-50 in terms of gender, including science and math classes, and I had never experienced or noticed anyone treating me differently than my male peers. My fist computer science class at university was ~5% female¹, and as I started to consume more tech media (ie. Hacker News) it became clear the Oregon State was not an exception.

Even after 3 years of classes like this, I'm really not sure how to feel about the dearth of diversity in STEM. But regardless of the emotions I cycle through or the discussions I have with people, one question that frequently gets asked is whether people treat me differently because I'm a woman,or whether I'm discriminated against. The answer is yes, of course: it's natural that people treat me differently because I'm a (very feminine) woman, but more than that I want to address the skeptical tone people take when they ask if I experience discrimination. My intention here isn't to shame people for their skepticism, compare my experiences to those of others, or have this be a "Woe is me!" post. But I want my peers to be aware that I do experience discrimination, and have a variety of negative and uncomfortable experiences that would likely not have happened, or had the same negative meaning, if I were a boy.

We use etherpads to organize events for the Linux Users Group, and each new user can identify themselves manually on the etherpad. However everyone has access to each name input, so a single user can put whatever they'd like as each person's name. Since most new users don't know about this feature, or don't care to put their name in, often one person will put their own name in each name input, so it looks like there are 10 'Elis' all talking to each other. 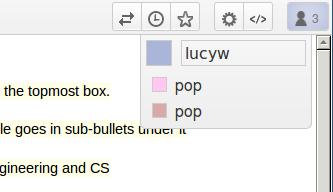 So, when planning meetings for LUG this term I took the liberty of doing this, putting my own name in each of the name inputs. Later that day I reopened the etherpad to find the following text at the bottom of the page: "Lucys been a naughty gurl. She gun get fired". I'm confident that the note was a very poorly done joke, meant to be harmless and completely missing the mark. But it was humiliating nonetheless.

A male colleague and I were on a bus from Corvallis to Portland, and happened to be the only people on the bus. Almost a year earlier we had lightly flirted in our interactions, but we had never done anything and since that time I had started seriously (and monogamously) dating my boyfriend. So, the colleague and I were sitting together, first chatting then watching a movie. He would occassionally make uncomfortable comments like "I wouldn't mind seeing you naked", but I would just ignore them and forge ahead in the conversation, thinking them relatively harmless. Then when the movie started he picked my hand up and put it on his upper thigh. Despite being only a 1.5 hour ride, it felt like the longest of my life. In all fairness I could have dealt with it much better: I was stunned and had no idea what to do, so ended up using the computer as an excuse to remove my hand then just tried to keep to myself and keep distracted for the rest of the ride, never telling him how uncomfortable that had made me or that it wasn't ok with me. In retrospect, I should have said something. Then again, it probably shouldn't have happened in the first place.

I was manning a Lego Robotics booth at the Corvallis Maker Fair. I had a little demo set up, and spiel about what my organization did, and spent most of the day showing kids how to program the robots and talking to very kind parents. As a swarm of kids left the table, one of the event organizers asked if he could get a short clip of me explaining the demo and then showing how it worked, and I said sure. I did the thing, he took the video, then left with his wife to see other exhibits. A nearby man who had seen the exchange came up, and after I started giving my spiel he stopped me mid sentence and said "You know he just wanted your picture, right?". Lost for words, I think I just gaped, then turned to someone else and started helping them with something. His comment made me so uncomfortable, and marred what had been a great morning and memory.

By now I had graduated from university, but was visiting Corvallis to see my boyfriend and celebrate his roommate's 21st birthday. It was a Friday night, and as we were touring the bars and restaurants of Corvallis we met a few people who were friends-of-friends. This resulted in a group of 8-10 people eating at a pizza joint, only some of whom I knew personally. After long conversations that I had a hard time contributing to, I found a tiny foothold for myself: "Oh, yeah, I used to love that mine game...mine stopper?". "Minesweeper" my friend said. Then, a voice down the table from someone I didn't know said "No worries, it's got a lot of numbers in it". I hope that he didn't mean to imply that a game with lots of numbers in it would be hard for me to remember, enjoy, or be good at. But in the moment it felt like I was being pushed even further out of a conversation I was already not a part of, and like that was what he was implying. I left shortly after, holding back tears, and was told that I should have just said "Fuck you" to the guy and carried on. I shouldn't have let it ruin the evening, and should have asserted that it wasn't an OK thing to say. But why is that burden on me? Why didn't my friends defend me, or even notice that I was visibly upset at the comment? Why didn't anyone else think it wasn't OK?

Now that I'm working in the real world, I realize what being treated equally is like. I love my job, and am a respected colleague at my workplace. People who have been in the industry since I was born ask for my opinion, have me review their work, and I never second guess my standing among them. This makes discrimination that much clearer to me: each time someone doesn't assume I'm their equal, it stands out. It stings. In so many ways, I wish I could go back to when I didn't notice it. When a comment like that could have been totally innocuous. But it's not, anymore.

My experiences are my own and don't necessarily reflect or represent those of all women in STEM fields, but I hope they do humanize the diversity struggle in those industries and highlight the ways in which sexism is still happening. It's not all bad: I have always received equal pay for equal work to my male peers, am respected within the community, and have never felt that I was denied an opportunity, promotion, or position because I am a woman. At the same time none of the above experiences would have happened if I were a boy.

Unfortunately, I'm not the first or last technical lady to have these experiences. You can read about others experiences with discrimination in tech here:

If you have an stories of your own that you think belong on this list, please email them to me at wyman[dot]lucy[at]gmail[dot]com. You can include your name if you'd like for me to include it in this post or submit it anonymously, and I will add it to this post as soon as possible. If you have any other questions or concerns, feel free to email me at that address as well. Have a lovely day!

1 This number comes from me very unscientifically counting the number
of people in class who appeared to be female and asking the professor how many students total were in the class. I understand that appearance is not an indicator of gender, and there's possibly errors in mis-identifying individuals, particularly if they're not gender binary. I apologize for this, but the point remains the same: the class was dominated by male humans