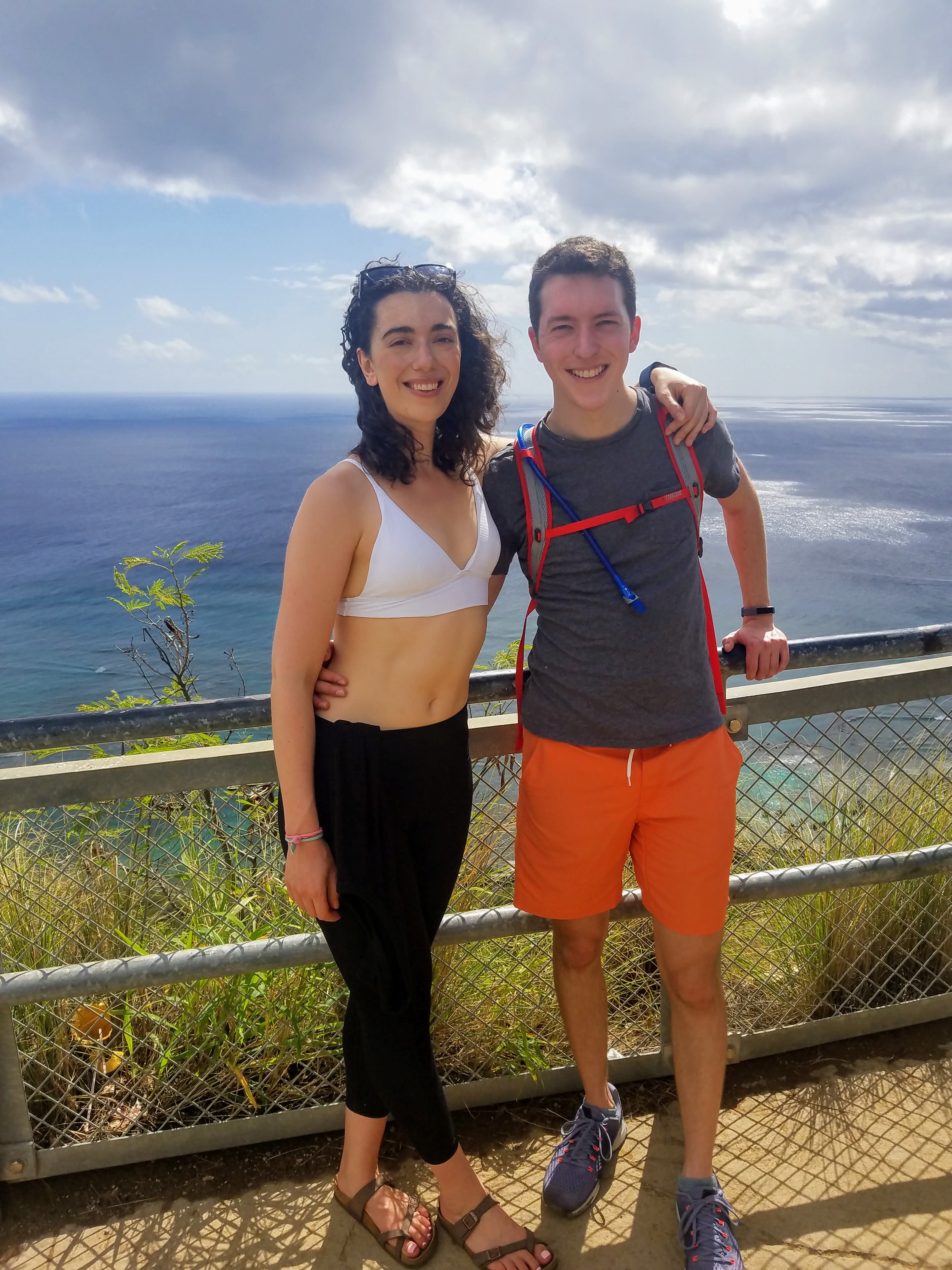 I scheduled a trip to Hawaii over my birthday, originally planned for February 12th-18th. After a wonderful but cold trip to Japan last year I knew I wanted to go somewhere warm during the worst part of winter, and Hawaii seemed as good a sunny destination as any. 2 weeks before we were going to leave Seattle got some snow (5-6"), and the entire city shut down - groceries and gyms closed, walking was impossible, it was a bad time. It made me realize that the city isn't prepared to handle snow, and that I start acting out 'The Shining' pretty quickly. The first snow thawed out a bit, then a week before we were going to leave I saw that we were scheduled for about 8" of snow over the weekend. In the most impulsive and fancy thing I've done, I called United to reschedule my flight for the next day and found a dirt cheap AirBnB to stay at in Honolulu for the extra 5 days I'd just added to the trip.

In terms of dollar-to-value it's the best money I've ever spent, and I'm so glad I decided to go early. Before I'd even landed I got emails from our gym that they were closing for the next few days, and Eli texted me the next morning that the power had gone out (he had to stay in Seattle until the 12th for work). Meanwhile, I was soaking up the sun on the beach and wearing shorts and t-shirts.

Between the excitement of skipping the snow and the beauty of Hawaii, it was a fantastic trip. I loved every minute: the hikes, the food, the sun. It was a vacation tailored for me, and the worst part of it was having to leave. Luckily we have seeing Luna and our roommates to look forward to at home, or I think we might have actually just stayed forever... 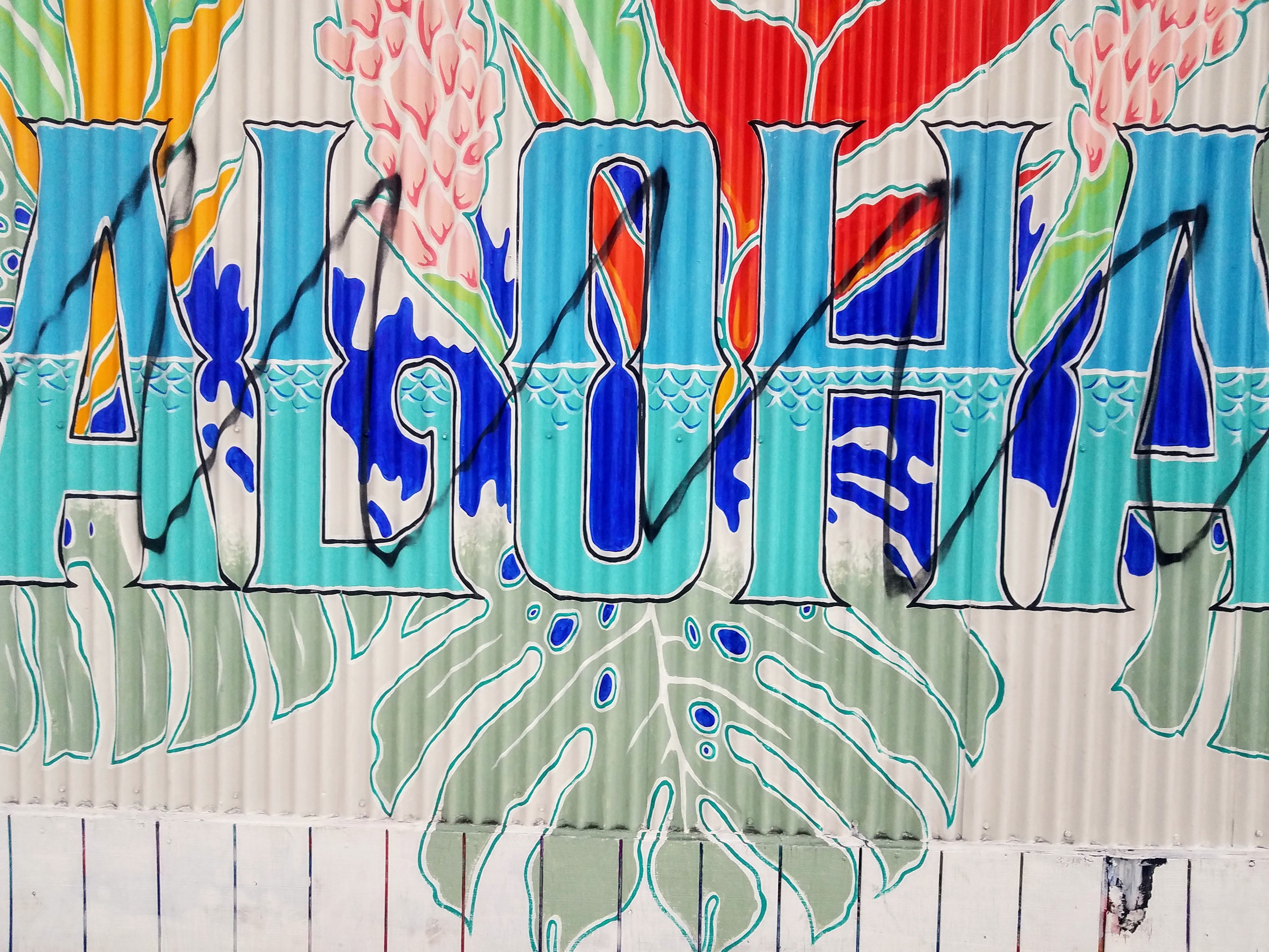 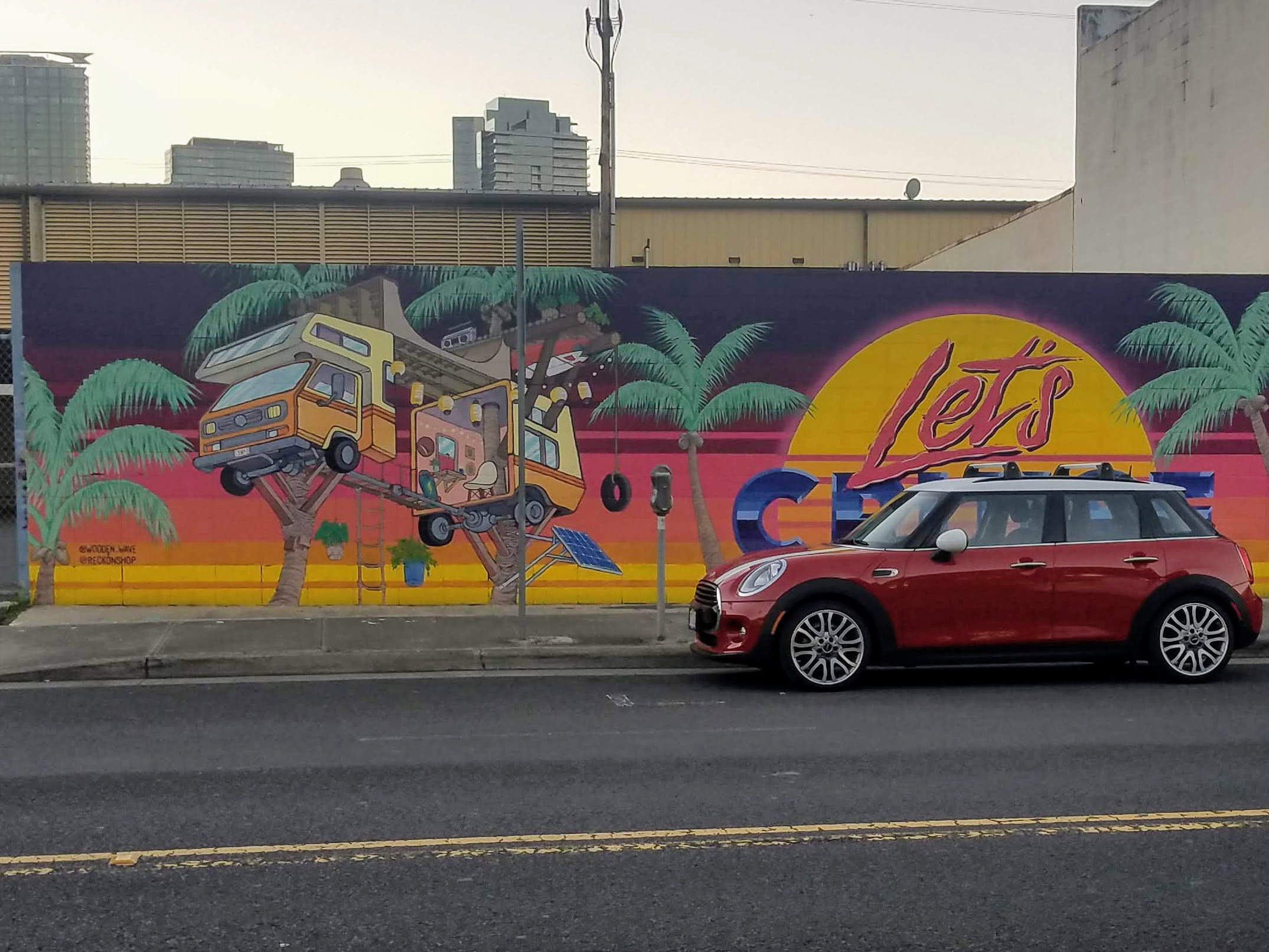 This neighborhood is a gem in west Honolulu. It ended up being close to my first AirBnB, which gave me ample opportunity to wander it's streets and admire the murals, try the coffee, and enjoy the community. The farmer's market was a fruit-filled delight, and I even stumbled upon a Ukulele festival while hanging out in the area. The art alone is worth the trip, but you never know what you'll find in Kaka'ako. 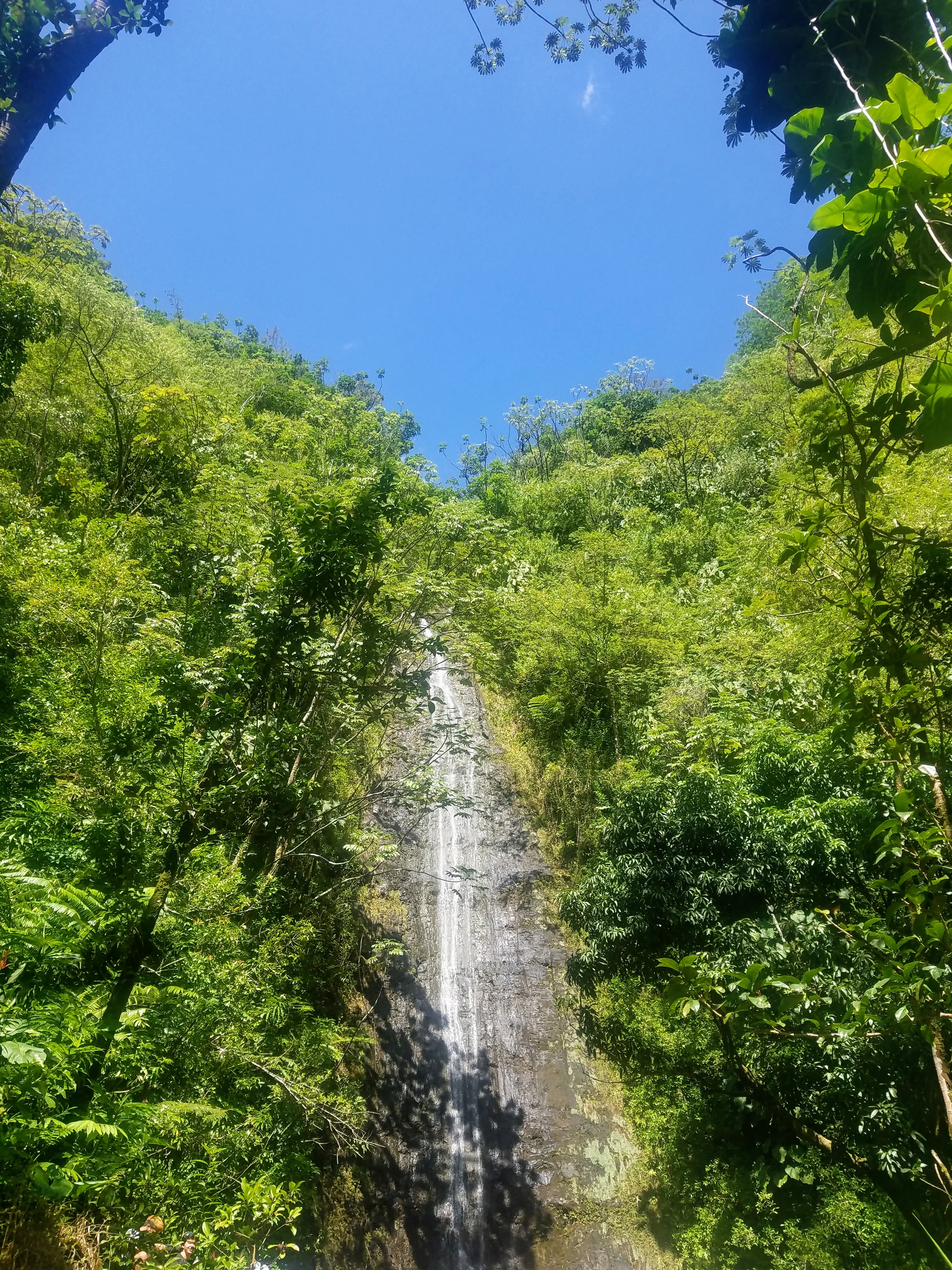 This was the most hilariously touristy hike I've ever been on. There's a snack bar at the trailhead, signage every hundred yards or so about the trail or providing directions, and about 1 million people at the waterfall itself (some 0.8 miles from the trailhead, or about a 20 minute walk). It was a fun and quick hike, as much for the people watching as for the nature, though if you're looking to 'get out of the city' I'd recommend venturing other trails. 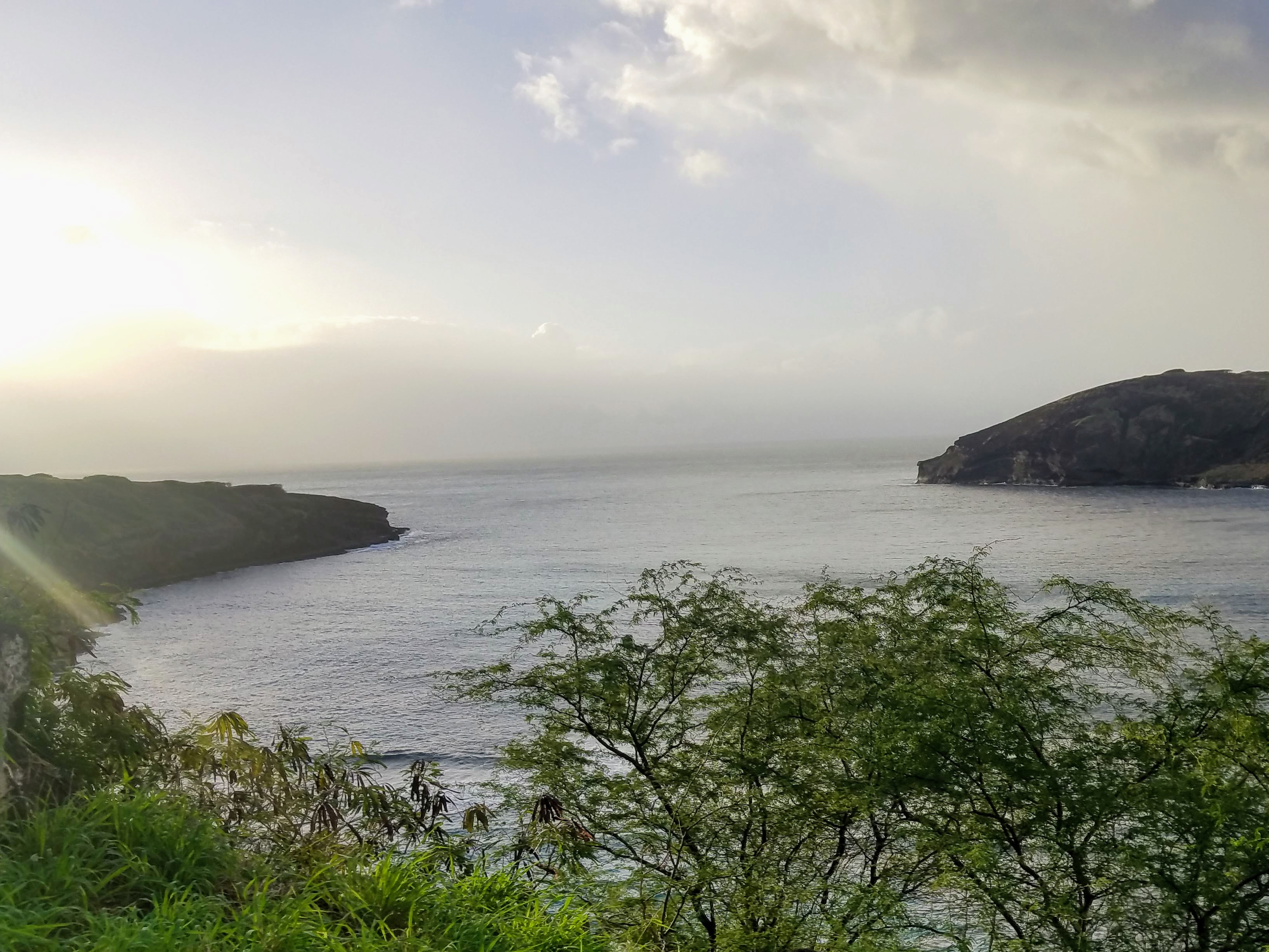 I ended up here early Sunday morning, and despite getting caught in a downpour enjoyed the nature preserve. The views at Hanauma are breathtaking, and watching the sun rise over the bay was one of the most memorable moments of the trip. Definitely worth the hour long bus ride, and the only hike I would have gladly done twice if we had time.

I saw no less than 4 couples taking wedding photos on this beach, and it's no wonder why: it's gorgeous. The strip of sand is narrow, but was nearly empty and was bordered by a nice boardwalk and park. It has views of Diamond Head and Waikiki, not to mention ~the ocean~. I found myself coming back throughout the trip to enjoy the sand and sun here. 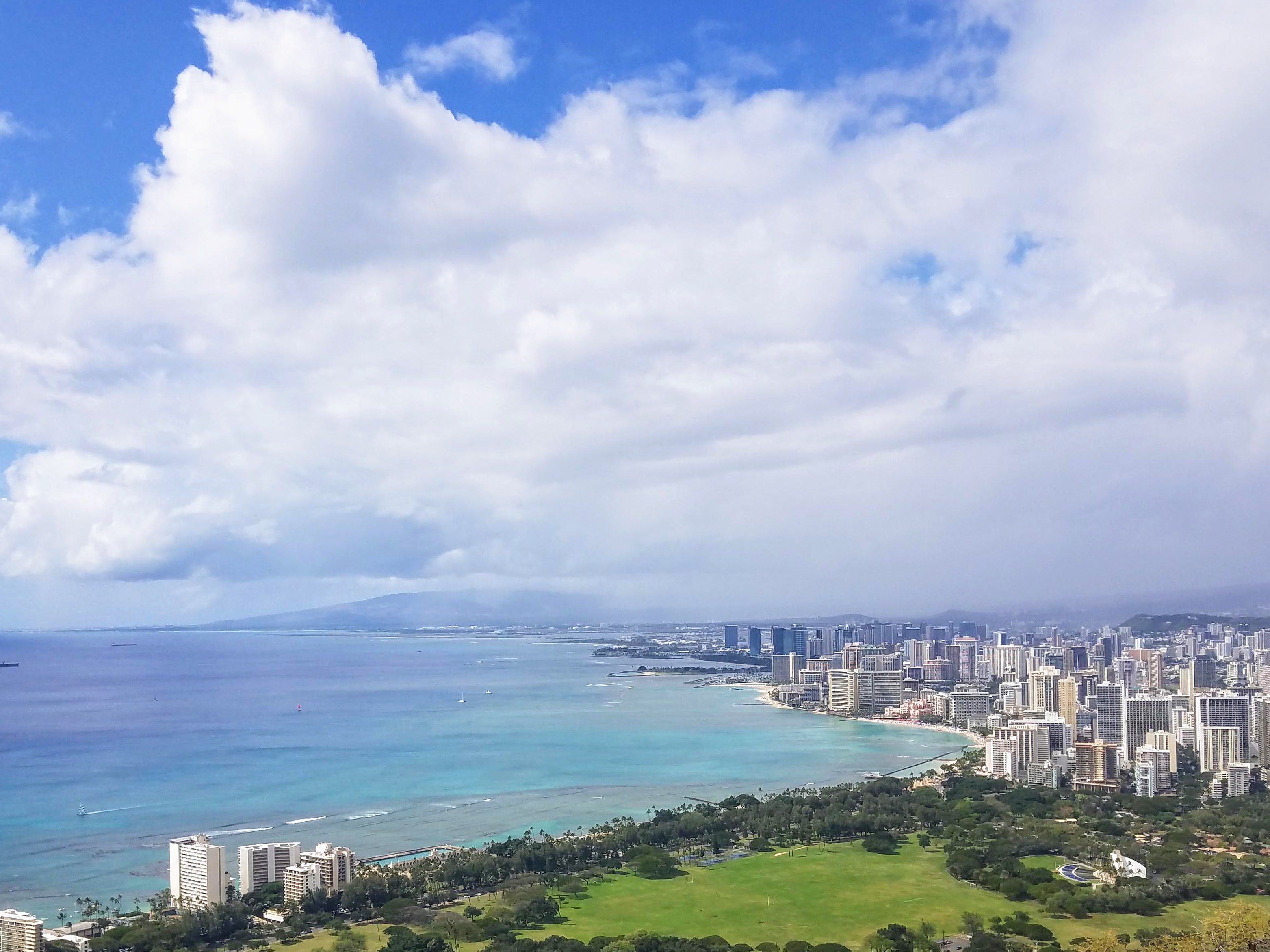 Much like Manoa Falls, this was more of an urban walk than a hike. The trail was crowded - even at noon on a rainy Wednesday - the walk was steepish but quick and there were signs and snack bars galore. The payoff at Diamond Head was much better than Manoa Falls though, and even with the rain it was well worth the sweeping vistas at the top. Be ready to go slow and share the trail, but otherwise highly recommend for hikers and non-hikers alike! 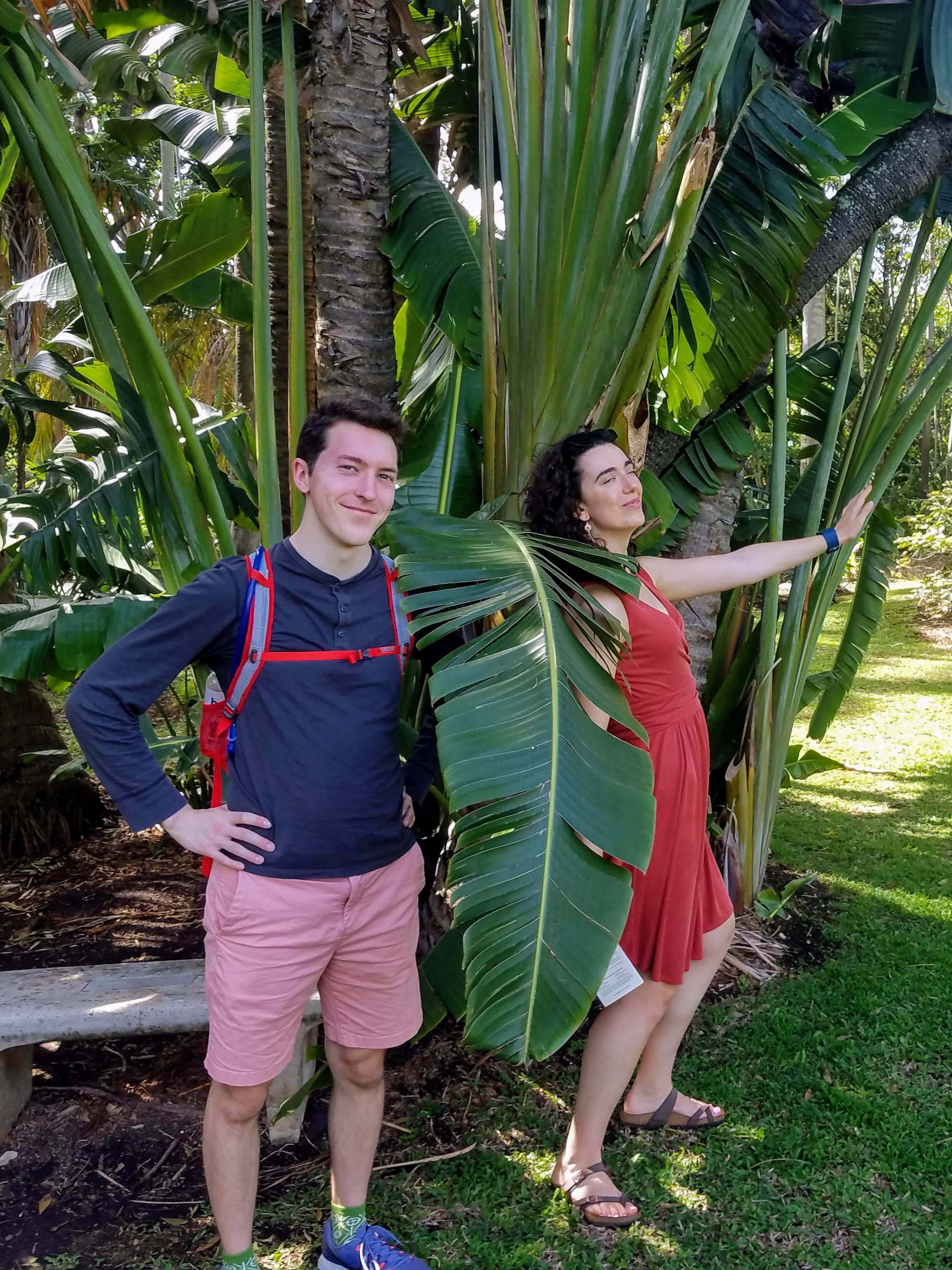 We were going to see George Lopez on Saturday night, and found ourselves with an hour or 2 to kill in that area of town before heading over. We probably wouldn't have gone to the garden if we hadn't been in the area, and it would have been such a shame! The garden is beautiful, even (especially) in winter when you haven't seen flowers or sunshine in months. They have a self-guided tour, so you can visit and read about the different types of trees and foliage they have at the garden. It's big enough to get lost in, but small enough to see everything in about 2 hours. A lovely Eden in the west part of the city. And if you're hungry before or after definitely make your way to The Pig and the Lady nearby for delicious Vietnamese fare.

We made reservations for a luau dinner and show here without knowing much about the center. It was an authentic, respectful, cultural education center with a Disneyland veneer. The center is composed of 6 villages representing Polynesian islands, and presentations on various aspects of each island's cultural are given throughout the day. We were expecting a super-touristy, low-budget Pocahontas type of place, and while there was some of that overall we were impressed and learned a lot about Polynesian culture (turns out: Coconuts are a big deal). 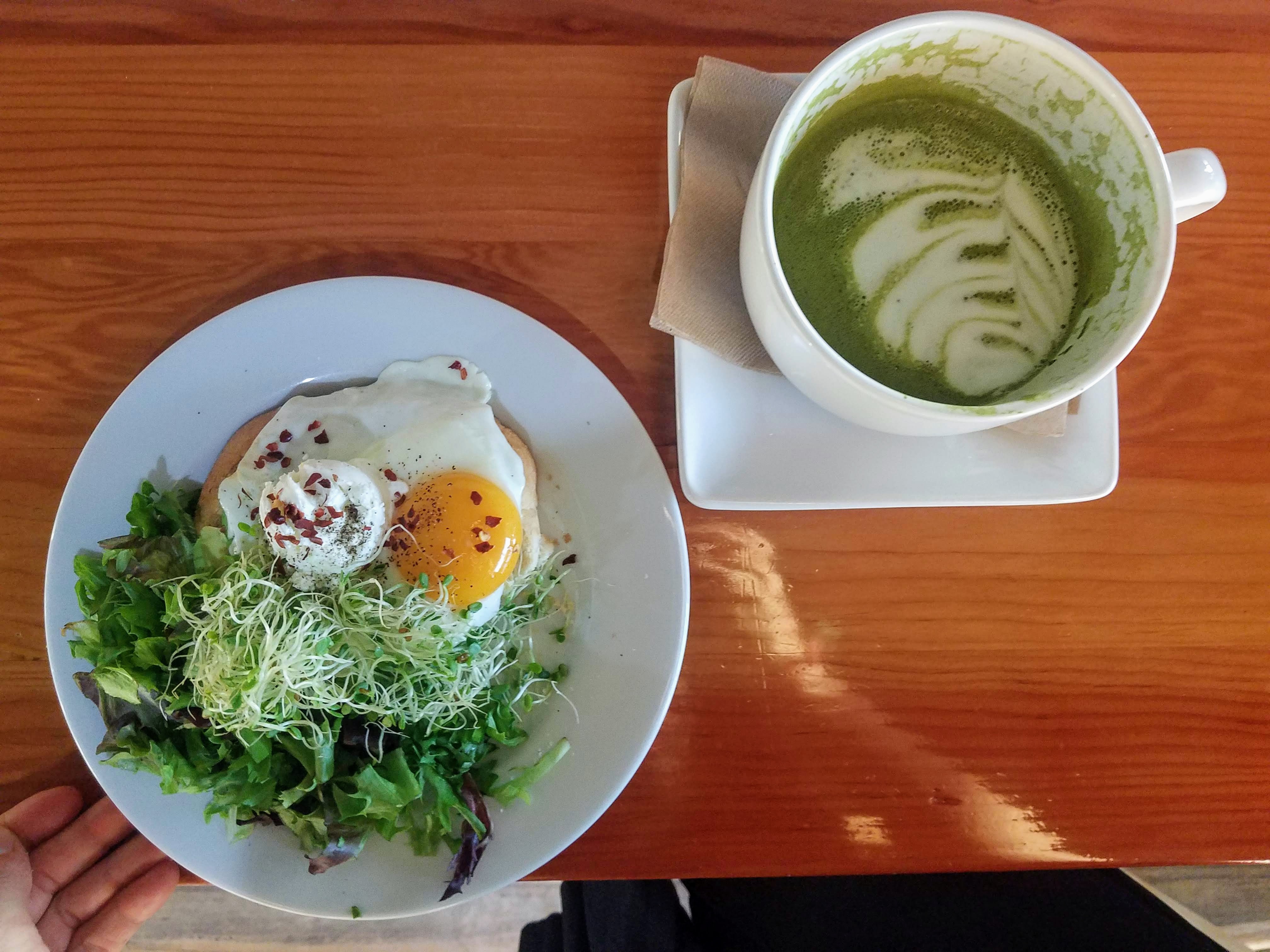 This might be the perfect cafe. I worked from Morning Brew my first morning in Honolulu, and was blown away by every aspect:

I basically called this place home.

I don't remember how we heard about Waikiki Yokocho, but if we hadn't been turned on to it we would definitely have just passed it by. An underground Japanese food court, Yokocho has a variety of Izakayas, Ramen restaurants, bars, and a green tea shop called Nana's. It reminded us so much of being in Tokyo and had wonderful food.

The star attraction for me at Yokocho was Nana's - and I recently learned they even have a cafe in Seattle! Not only was their matcha stellar, but we tried the Adzuki bean soup (very sweet but filling, and it came with mochi!) and the Hojicha (waayyyyyy too sweet, not my cup of tea PUN INTENDED). 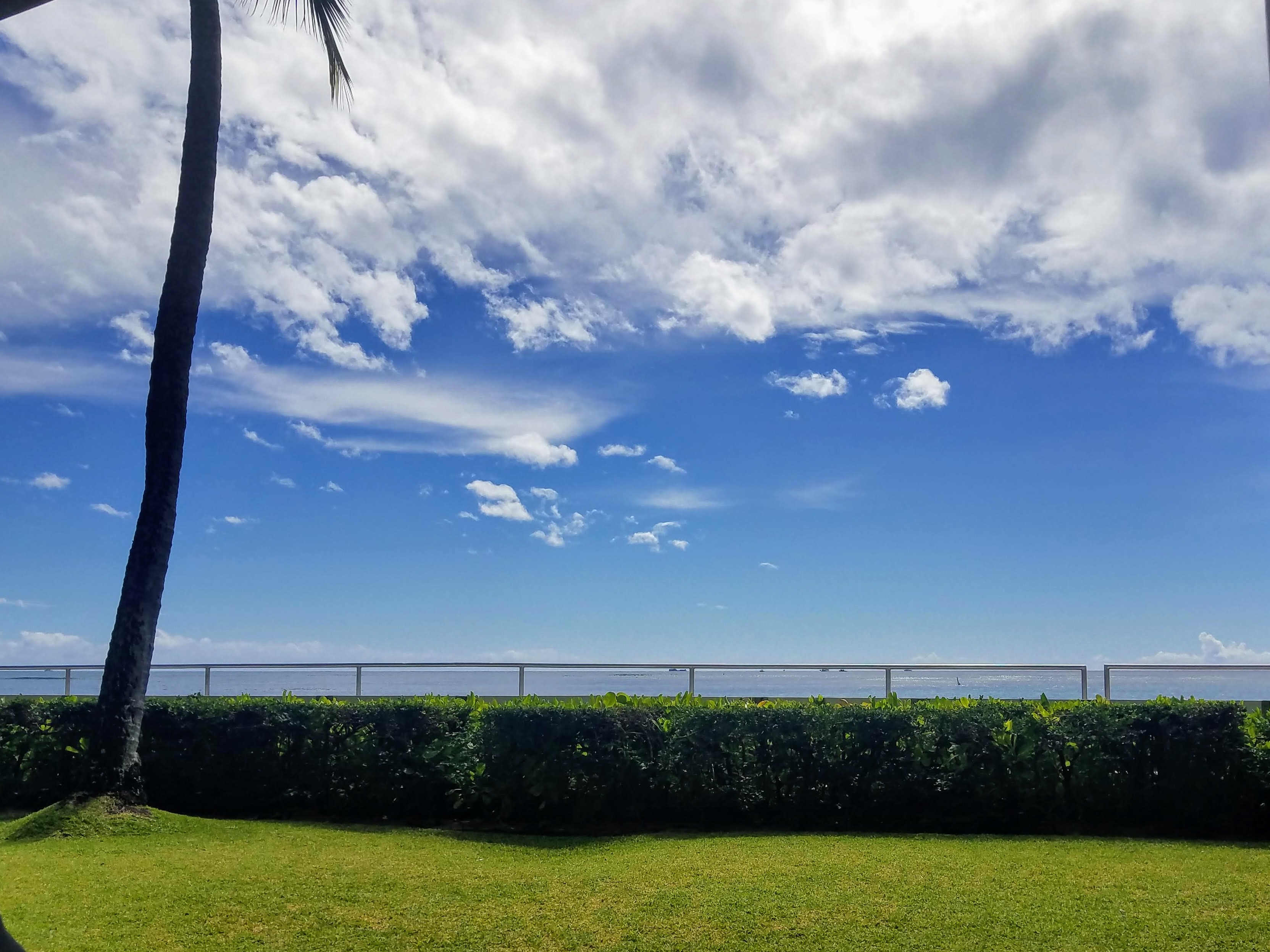 We went to this very swanky restaurant in a very swanky hotel for my birthday lunch/dinner, and it was the greatest. We were seated at a covered porch overlooking the ocean, and I'm trying to think of more good things to say but really the deal was just great view + out of this world food.

Another Japanese food court! This was a huge food court in the basement (literally subterranean) of the Ala Moana Mall. Complete with sushi, bentos, crepes, and too many ramen places, this cafeteria even had rows of gashapon and an on-site fortune teller! 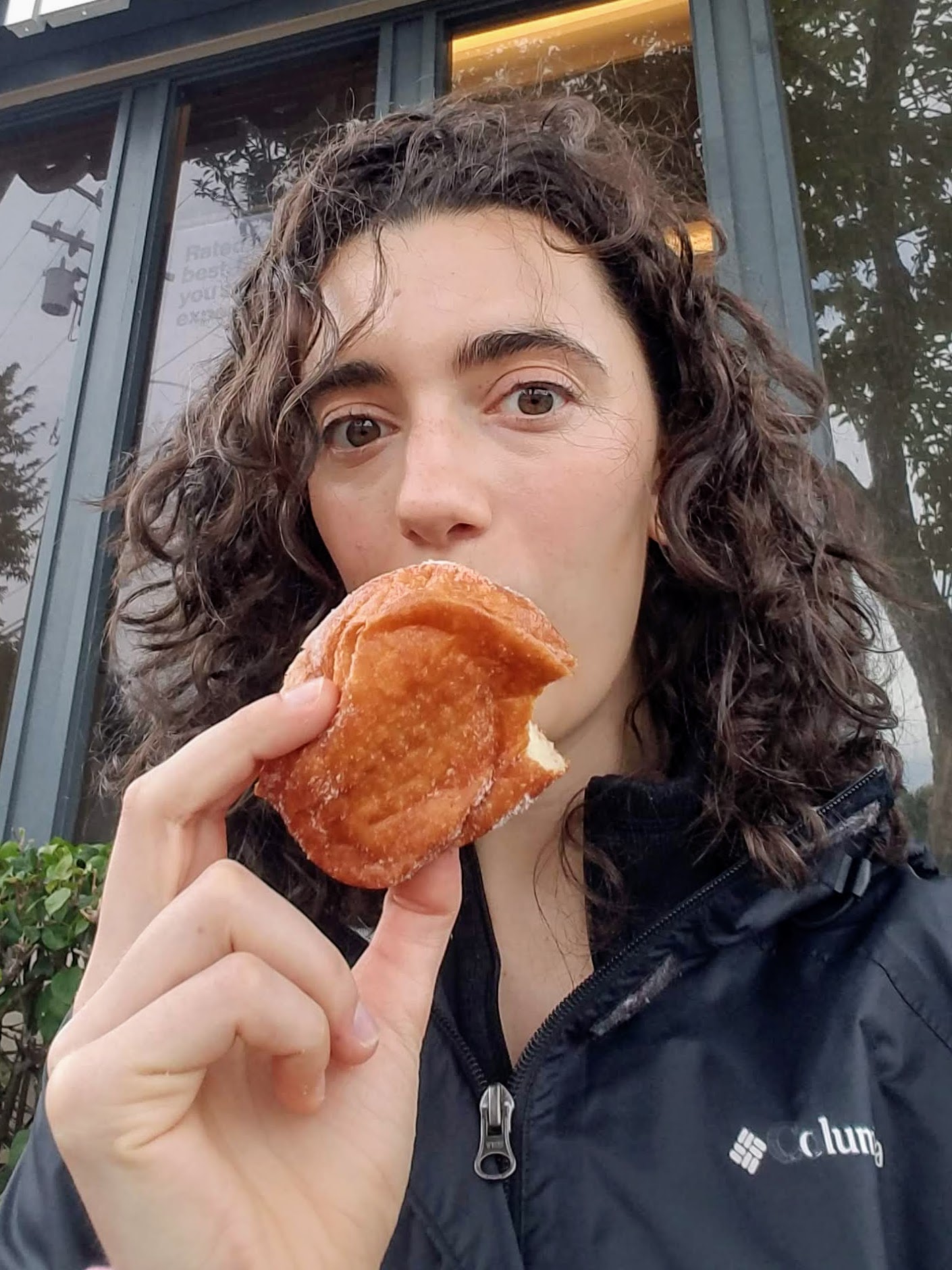 I suppose every city needs a touristy donut shop, complete with a line out the door and signature pink boxes. We went to Leonard's expecting it to be the VooDoo Donuts of Honolulu - overhyped and disappointing. We were pleasantly surprised to discover that Leonard's totally lives up to the hype! They sell Malasadas, which are yeasty and only slightly sweet donuts. They were hot off the press and lightly dusted with cinnamon-sugar, soft as pillows inside and crispy on the outside, almost more like a beignet than a donut. We're converts!